I forget when I first heard about Runuary- perhaps it was immediately after my New Years Day run, long scheduled in my holiday calendar – but it certainly caught me in that fleeting glimmer of optimism in the opening moments of 2017.

Organised by Hove-based organisation, Girls Run The World, Runuary was a running streak- not demanding any particular distance or speed, but just requiring you to run every day of the month. I was interested to see if I could get myself out the door, day after day after day.

On January 1st, I headed out for to parkrun on Southampton Common. I was running with Arron, who asked in advance what my PB was. 27m 45, I told him. He was going to look after the pacing so that I could attempt to go faster. Arron’s dad, Mike, came to support us, standing on a looping section, where we threw excess clothing to him as the quickening pace warmed our January cockles. In the final straight, I tried to sprint finish but found myself literally clinging to Arron’s shoulder gasping for help, struggling to move forward at all. Eventually I crossed the finish line, and almost needed help through the tunnel to pick up my token. 27m 33. I’d done it! 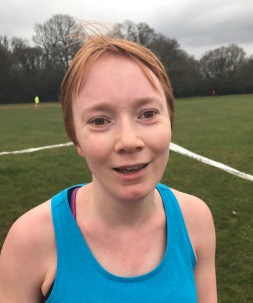 But my question was- how had I done almost that time on my own, over a year ago- before a year of sprint training had gotten me accustomed to almost vomiting from exertion? Once back home, I looked back over previous results to realise that I had totally imagined that time- my previous best was closer to 29 minutes. Whoops. No wonder the end was so hard.

The following day, I dutifully ran a hills session, as Mark had asked me to over the holidays.

Now I was back to training at Heathside 3 times a week- which meant dragging myself out to jog on the inbetween-days. Around day 7, with more than 3 weeks still stretching ahead, I began to wonder if I was made for this. 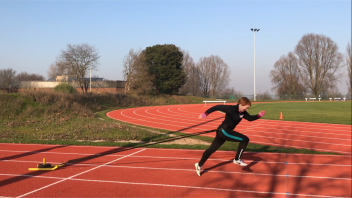 Initially 2 or 3k seemed like a ‘proper’ run, but as I reached towards the end of January, this was what I would do on my tired-days; or on the way to a circuits session. Three times over the final week, I ran the 6km to work- where I then taught acrobatics for 5 hours. I would never have been able to manage that a year ago. 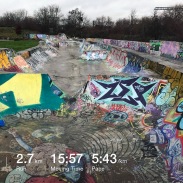 The longest run, and perhaps my biggest achievement of the month was trying Cross Country for the first time. Heathside’s eager XC runners have baffled me since joining. Of all the events you could do, why choose the long, cold, wet, muddy one? Yet in a moment of madness, I messaged teammate Noelle (both a long-sprinter and XC runner) and offered her a lift to the Sunday League XC race in Watford. I was bound into it.

The night before the run, I dreamed that Noelle was giving the pre-race briefing, showing us how to crawl backwards through narrow, muddy tunnels. When I awoke to realise that the only thing I had to do was run (and forwards, at that!), it didn’t seem so bad- even as we drove to the race though the driving rain.

As the race started I discovered the first rule of cross country: keep your mouth shut. The mud from the majority of the 386 runners sprayed across the faces of those of us bringing up the rear. Up and down the slippery slopes of Whippendell Wood we went; supposedly 8k but in reality closer to 10k. Once again, Arron joined me for support, which was needed when my foot went numb and I needed to loosen my laces, but found that my fingers didn’t work anymore either. 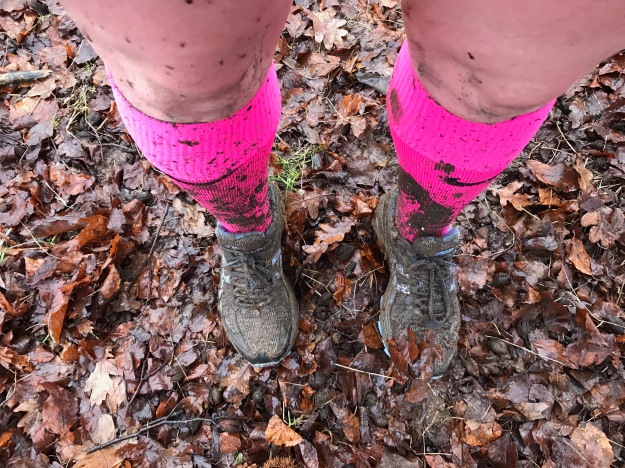 We crossed the line in 63 mins (versus the winning woman in 41), shocked to not quite be last- I was 364th. We did, however, come in late enough to miss the Heathside team photo; but we made it to the finish line with just a small amount of walking!

It was cold, wet, muddy and further than expected- but for some reason didn’t mind it too much- so much so that I’ve actually got the next and final fixture of the Sunday League in my diary. It was friendly, nobody seemed to care how slow I went and it felt like an achievement just to run, even being so close to last place.

A  weekend in Paris to watch Cirque De Demain threatened to derail Runuary- but I found there were 2 parkruns in the city. I chose the closest: Parc Montsouris; crawled silently around to try to get my running gear on without waking my room-mates; and headed to what I was sure would be a big event. I arrived to find the organiser, Kathryn, was from Yorkshire- who at 8.50am, was still on her own. She had set up the run just a few months ago, upon realising that both she and a fellow runner were commuting across Paris from the same block to attend the Bois de Boulogne run.

Come 9am, we were just 6 runners: 4 men, myself, and one other woman. For the first of 3 laps, I ran with the slowest man, Jeremy (a fellow Londoner, from the Ealing Eagles)- which was really a little fast, which resulted in slowing to a near stop on the long hill on the subsequent laps. All the same, I had the novelty of being the first female finisher.

31st Jan: I joined the Girls Run The World crew in Hove for the final 5km run along the seafront. In the driving rain, 60 women (and one man) donned head-torches & hi-vis for the last jog of the month. On the ultra-flat course, it took 27 minutes- faster than my parkrun PB, 30 runs prior.

Day after day, I managed to get out the house, start Strava and if it wasn’t pitch black, take a photo during the run. At first I felt almost outraged at fitting this new habit somewhere into my ever-changing schedule. By the end, it felt more natural. Commute to a meeting; run to pick up a parcel from the sorting office; get back home, immediately change and get back out again- snow, rain or shine. I was certainly aware that my body had not had a day off- feeling sluggish and worried that pushing myself might cause injury- but my outlook has changed. With regular running, a run can be just a run. Not a disastrous time, nor an amazing one. Just a functional run. Another small piece of the puzzle.

The last event of the TetraDecathlon is 3000m. Last year, for the final 5 laps I walked 200m/ ran 200m. The 13 prior events are no walk in the park but I at least feel that, thanks to Runuary, 3k in itself won’t break me now.